The UWCF fulfilled the dream of a young football fan 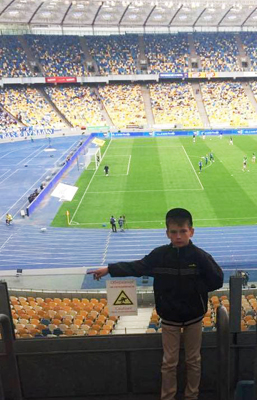 Within the framework of the "Take the kids from the street" program, the “United World Cultures Foundation” fulfilled the dream of the young football fan Yuri, inviting him on May 21, 2017 to the main sports and cultural arena of the country - the NSC "Olimpiyskiy", where the match of the 30th Liga Pari-Match Championship Round of the 2016/2017 season, between Kyiv "Dynamo" and Lugansk "Zarya" took place.

Yura is from the town of Uzin, that in the Bila Tserkva district of the Kyiv region, and his old dream has come true. Thanks to the "Take the kids away from the streets" program of the "United World Cultures Foundation" he managed to visit Kyiv for the match of his favorite football team "Dynamo", which played on May 21, 2017 on the main sports and cultural arena of the country - NSC "Olimpiyskiy". It was the 30th Liga Pari-Match Championship Round of the 2016/2017 season, in which Dynamo Kyiv hosted Zarya Lugansk.

Supporting the players with a standing ovation, Yura received a lot of impressions.

"My dream came true! - says Yura. - A little upset that the score is 1:2, but most importantly, I attended the match! You know, when Nikolai Morozyuk approached the ball, I even almost throttled my throat... I can not convey my emotions yet. First you need to come to your senses. Plus, I also went on a tour around the capital, and they treated me with ice cream. It's good when everything you think about comes true. Thanks to everyone, who helped to fulfill my dream!"