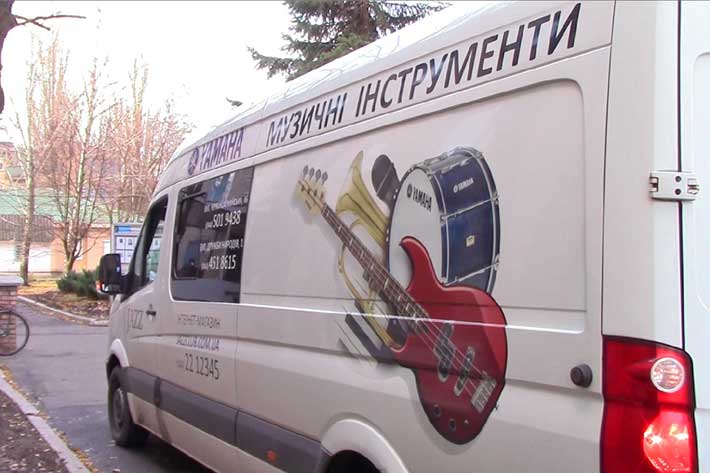 For the second time, UWCF team members covered the 700 km distance to visit the Music School operating under the Avdiyivka City Council and bring some musical instruments as gifts under the program “Children of Avdiyivka”. The trip was made on 11 November 2016.

The much-desired and much-anticipated YAMAHA piano arrived to 70 young pianists of the music school. The children used the opportunity to show their skills straightaway by playing the new instrument, and magic sounds were heard in every part of the school. Furthermore, UWCF delegation had a chance to enjoy the saxophone playing – that very saxophone presented to the music school before.

“From now on, we will have almost a Small Philharmonic Hall at our music school”, said the institution’s director Ms Svitlana Polivoda, while unpacking the newly arrived YAMAHA piano.

A true surprise for the school’s management, teaching staff, and students were the gifted violin ¾ and six classical guitars, including three designated for the youngest students. The bright yellow guitars depicting a cartoon character, Sponge Bob, will help teachers have even the naughtiest young players focused on music!

Total cost of the musical instruments handed over to the music school is UAH 100, 233.00.

All dreams about new musical instruments that the music school’s students, director and other teachers had, have now come true thanks to kind hearts of the staff members of DONTEM LLC and the chain of music shops IN-JAZZ, for which United World Cultures Foundation would like to express our sincere gratitude! Alongside selling the piano at a reduced price and granting other musical instruments, IN-JAZZ organized delivery of the total cargo, on the charity basis, from Kyiv to Avdiyivka, which significantly facilitated logistic issues for UWCF. This is because of such people the philanthropy still exists and develops in Ukraine.