Slava Gets His Vision Back 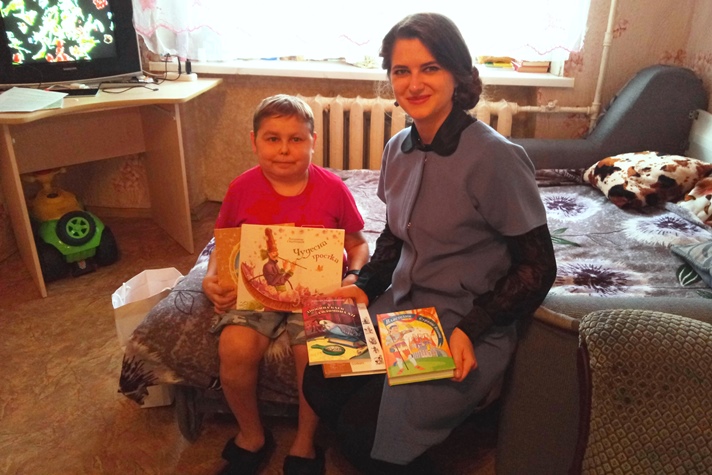 This story began with the acquaintance of the correspondent of the news program "Vikna" on the STB channel Artem Sorokin with the boy from Avdiivka - Slava Kasyanenko.

Slava has been fighting with juvenile rheumatoid arthritis for 23 years, which does not allow the guy to move freely, even in the apartment. In order not to feel severe pain in the joints, the guy needs to constantly take expensive medications, which also block the development of the disease. And apart from health problems, Slavik has a difficult fate - the mother of the guy who helped him with everything, died, the father and brother are serving their sentences in places of confinement, the boy's house is unfit for living because of the shell hit. Now Slava is guarded by a friend of the family Ekaterina, who in her 33 years took responsibility for the life and health of the guy. Now everyone is crowded in a small rented apartment in Avdiivka. Because of lack of funds, instead of expensive drugs Slava began to take their cheap substitutes, but this immediately affected his health - the guy in general stopped walking, quickly lost his vision.

Artem has appeared in Slava's life at this difficult time. He makes a lot of efforts to change the life of Slavik for the better and help him. With the help of the military, Slava was taken to the hospital, where, after examining the eyes, he was diagnosed with a "uveal complicated cataract of the right eye; cupped cataract of the left eye" and for the right eye the doctors recommended an extraction of cataracts with vitrectomy, for the left eye - extraction of cataract. However, another problem arose - the local doctors did not undertake a very complicated operation on the right eye, and Slava and Ekaterina gave up. The way out of this situation was the story of Artem Sorokin in the "Vikna-news", which was watched by the ophthalmologist from Kharkiv Andrey Yevtushenko, who is one of the first specialists in the field of vitreoretinal surgery in Ukraine. He volunteered to do this complicated operation for free.

In addition, thanks to the video and many reposts on the Facebook, the money for medicines and payment of supplies for operation for Slava was raised. The staff of the United World Cultures Foundation learned about Slava from Avdiivka from the Vikna-news and decided to help him. Within the framework of the "Shine of Happy Eyes" project of the "Walking to the Healthland" charitable program, the UWCF paid part of the cost of consumables for an ophthalmic operation.

Slava's right eye was operated on October 28, and the left eye - on December 2. "It was very scary before the first operation, and before the second one I was not afraid," - admits Slava.

Thanks to the efforts of 11 doctors from Kramatorsk and Kharkiv, namely: ophthalmologists, surgeons, resuscitators and anesthetists, the operations were successful and Slava got his vision back.

"Even before the operations, I discussed with Ekaterina the issue of making new quality glasses for Slava, however, having come to visit after the operations bringing presents, I was pleasantly surprised that Slava did not need glasses yet. Ekaterina gladly informed that Slava independently reads even the small print of SMS messages, - shares Olena Kobets, the director of the Charity Foundation. - In addition, Ekaterina told that with the money collected by fellow citizens, she was able to purchase all the necessary medicines for a whole year".

Next year, Slava is planned to undergo an operation to treat his underlying disease - juvenile rheumatoid arthritis. And now the large family of Ekaterina and Slava is preparing to celebrate the new year. However, the miracles for the guy in 2017 have not yet ended - Artem, who became a real magician for Slava, prepared a surprise for him and invited him to the capital. Slava and Ekaterina are happily getting ready to go to Kyiv and are in anticipation of the New Year's fairy tale.

And we do not say goodbye to Slava and wish him good health!

Slava's story is another proof that only by their indifference people are able to create real miracles for someone!